when ramadhan rolled around, I planned to wake up earlier than usual to help mama kraken prepare sahur. I figured that I better start practising waking up super early and getting myself comfy in the kitchen, in case we are on our own next year. gone are the days where I could wake up after food is served on the table, waiting for me.

so in the beginning of ramadhan, I succeeded in waking up about half an hour earlier to help mama kraken to at least set the table. unfortunately as ramadhan progressed, my resolve regressed. I started waking up later and later and eventually barely helped much to prepare sahur. whoops.

I also had grand plans of learning from mama kraken how to cook this month. that one also fail because usually after I reached home from work, I’d be too tired (and admittedly lazy). padahal I adjusted my working hours (again) such that I get to knock off at 5.00pm. hai. I really worry about how I’m going to prepare food for sahur once we have our own place. guess I’ll have to try harder in the next few months to learn from mama kraken while I’m still at my parents’. alternatively, I could get NG to do the cooking for us ha ha. I’m happy to do the dishes seh. but no lah. new roles as a wife and homeowner means I must work hard and learn new skills. menyesal jugak tak belajar masak dari dulu…

but anyways the possibility of us observing the next ramadhan, kalau panjang umur insyaAllah, at our new house is 50-50. our BTO’s probable completion date (PCD) is 2Q 2016. I’m hoping and expecting to get the keys by 1Q 2016. I believe the days when projects are ready about 6 months earlier are over cos of labour crunch and all the recent hooha on defects. perhaps the contractor will take longer to do their own inspections. there was a recent project in my neighbourhood when the keys were handed over after the PCD so yeh. we shall see.

I’ve begun to look at renotalk to familiarise myself with reno jargon and collect ideas. fun ah reading the t-blogs. some of the writers are so gerek, I cannot. also, this means that I’m back to saving hard for the next milestone in my life. it doesn’t end does it? but takpe lah. it’s a rite of passage for anyone who settles down. and I should be thankful that i have this one year to save — I’m not sure if I could have made it if I needed to save for both wedding and house at the same time

back to our first ramadhan together … or not.

another “highlight” was that I spent the first week (and the one before that) apart from NG. he was in LA and San Fran for his incentive trip, which he earned after hitting some performance targets at work. it was the most miserable time of my life. haha. I mean, I knew about the trip before the wedding, but back then i didn’t think much about what it was going to be like as a new-ish wife being left behind by her new-ish husband. it’s like this -> (T_T). you know lah pengantin baru. we want to be together 24/7 where possible. sorry kalau meluat, but it’s the truth!

so yea I have newfound respect for wives whose (new) husbands get posted overseas. it’s not easy dealing with the loneliness or trying not to be petty over little things to make up for the lack of attention and couple time. it probably gets easier over the years when the marriage is more stable and stronger (insyaAllah). but for me, it was a dark place. espesh when I was having bad days at work and he be posting photos like this:

geram kannn! nonetheless, I must be thankful that he came back home safe and sound. alhamdulilllah. all this was in mid to late June, during the time when Singapore and the Malay community were reeling in the sad news of the Sabah earthquake victims and the unexpected departure of a young actor. the general mood was somber and we had reminder after reminder that death comes anytime…

ok, ok other than that, ramadhan with a husband is very sweet. in previous years we saw each other less during ramadhan, but insyaAllah starting from this year, we get to sahur together and plan for raya together and split duit raya into half hahaha ok just kidding. (it’s not true because you also have twice the amount of people to give.) and of course the best part is having extra hands to help with house cleaning, woo!

because I’m still staying with my parents, my first ramadhan as a wife wasn’t too foreign. can’t say the same for NG, though. but perhaps a key difference now is splitting our buka appointments between both families, friends and work. and it’s interesting to observe the differences between our family cultures wrt Ramadhan. luckily there was nothing too striking to warrant major adjustments from either of us, so it was all good. alhamdulillah.

hari raya… let’s just say there are good days and then there are bad days ha ha. padahal it’s only the first week eh.

but to elaborate a little: luckily for us, our families’ schedules for first two days of raya didn’t clash. his parents typically stay home to receive guests on first day, while mine does that on second day. so NG and I mostly went out with my family on first day (after visiting his mum and his nyayi) and then with his on second day.

at first I was apprehensive about how visiting his relatives for the whole day would be like, but it turned out ok. I guess raya visiting is pretty standard. it helped that NG gave tips on whose house ada extra-delicious food (lol! PBG alert. macam mana tak gain weight over raya), background on family history and also if there’s any tension anywhere. which is important to know as a newcomer so you don’t unwittingly say the wrong thing to the wrong person heh.

outfits wise, we made two failed trips to Pasar Pandan in JB to find his baju kurungs. the first failed cos there was no parking lot, the second failed cos there weren’t any baju in the right colour, collar and size. our second trip was on a Ramadan + work night… omg cari nahas betul. then on raya eve, we went to Geylang bazaar to continue the search. just as we were gonna give up, NG settled for this green kurung which wasn’t in the ideal shade but ok lah at least dapat jugak.

moral of the story: shop early.

and if I had been smarter, I would have bought extra kain back for his baju kurung back when I was in Bandung in Feb. ah baru lah super matching with mine, which was what I obsessed with this year.

other than that, our first salam-salam on pagi raya as husband and wife was teary for me. ’twas such a precious moment, and I look forward to more. insyaAllah 🙂 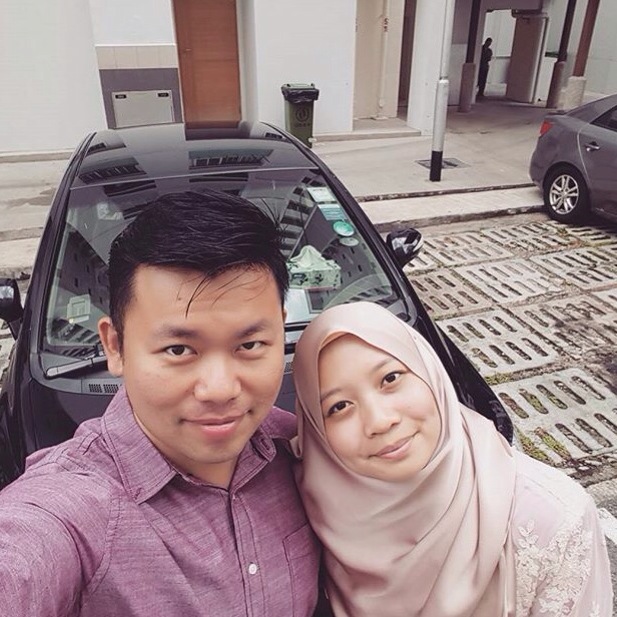